We are now going to do a review of Lovelyz with their song When We Were Us.

As can be noticed, their agency Woolim Entertainment and 1theK provided different titles for this song. While in Woolim itself, the title was Beautiful Days, in 1theK it is titled as When We Were Us. Most reviews opt for the former title. But for simplicity, we will opt for the latter title.

I only came across Lovelyz when I was about to make a misheard lyric last year. This group focuses on drama genre, that is not too slow and not too emotional, but totally exciting in itself.

They need to be featured more in the sea of K-Pop, hence, this MV review. Hope this will help them become relevant amidst so many comebacks. You may watch first their video before proceeding to review:

The storyline revolves on how they cherish memories, and leaving bad memories behind.

1theK, in its YouTube page, provided a short storyline for this:

Title track ‘When We Were Us (Beautiful Days)’ was arranged to fit the season with the cool and refreshing sound by maintaining the existing color of Lovelyz. The charming synth sound and the sentimental voice of the girl band was expressed with the lyrics about the most beautiful moments, showing the emotional color of Lovelyz.

The soft light theme is consistently featured in the whole video.

The moral lesson that can be seen in this video is on reminiscing memories, and welcoming every morning as if we own the future.

Added moral lesson that might not be noticed is when a member waters the plants. This represents relationships that must be nurtured everyday to grow. Otherwise, it will wither and die. 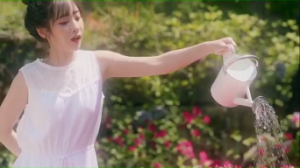 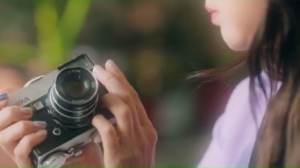 They might also find the same with hard copy of pictures at 2:19 – 2:21. This lets us recollect on how our parents and grandparents collect pictures they take. It is given that while we can take pictures and collect it instantly, our parents had to be patient when dealing with these kinds.

Recently changed this criterion in order to fit well with the slow nature of the song. Being the case, this is seen on members sitting and thinking, telling viewers to do the same.

Pardon for the score, as I am certain that this won’t make it to TV and radio.

KPopReviewed noticed that no news of the girls has been heard since their previous song. With summer fast approaching, it is expected that many artists will release tracks for this season.

Positive side for the group include their “refreshing” tones and light scenes. Lovelyz also struck the balance between their trademark soft songs with so-called “retro synth-pop.” Another positive aspect is on their performance, which is more “feminine”.

It also made an observation that it anchors to the past tracks, which may be “intentional”, particularly on the solar system rolling, and a member holding pictures. However, downside, the music might not be worth remembering when looked upon as a whole.

TheBiasList appreciated Woolim Ent’s efforts “to curate music that stays true to its artists’ personas.” That is, they refused to sway to popular tracks, and sticked to what would define their group well.

The blogger favorably rated the group, appreciating their cute and popular music, recalling their throwback to their debut. Lovelyz dealing with this kind of genre stood the test of time. Even if without greater impact, it is still valuable as a “solid addition to an incredibly distinct singles run.”

I find the tune somewhat similar to their previous song Lost N Found. Just listen to the chorus.

Honestly, at the bridge, I can’t help but cry. I don’t know why, but the tune gave me a painful feeling.

I also find the music video and the music very calm and refreshing. Hope K-Pop fans might consider adding these, as the group presents a different side of the said genre.

On dances, I have to rate it less one point, as they lacked the exciting factor, which is supposed to keep the MV more alive.

As to GFRIEND, they drew inspiration from their soft light concept and memories concept. It can be seen throughout the video. On the soft light, GFRIEND has the darker side, while Lovelyz has brighter side. 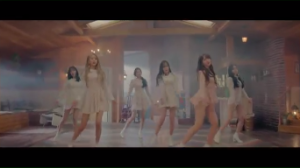 Another thing noticed is they both have a cake, where one member blows it. 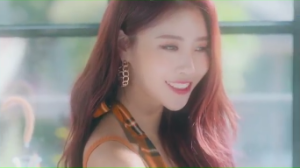 Lovelyz is part of 1theK group.

Talk about having a worldwide K-Pop content, and ability to unite different agencies. They did not only feature it at 1:17 – 1:20, but also at the end of the video. This is presented as a small icon at lower right side:

Other groups under this family can follow suit, if they don’t want to feature it everywhere in their MVs.

Lovelyz presents a different side of K-Pop, particularly on the genre they chose.

This rating reflects the favorable response from reviewers, and I hope this will inspire the group to do more.

It would be better for them not to change their specialty, which will help them be distinguished with other groups we have now. Meanwhile, it’s just on timing, and time will come that they will be further recognized in this genre they chose.

We will now review for the first time GOT7, with their newest song Eclipse.

While we dealt with them in our previous misheard lyrics, this time we will review their first release this year. Let’s relax first on their music before we review it:

The video tells of different phases of the moon at chorus. It also features endless stars and breaking glass. These things imply that they are in a constant, endless state of war with love, and that they expect that it would be dark and sad.

They lacked one point, as the storyline must be clearer to understand.

The themes GOT7 consistently featured were on astronomical objects and on glasses.

Pardon for the score. I don’t see any moral lesson featured here.

Viewers could benefit from the knowledge shown by the boy group.

First is on learning different phases of the moon.

Second is on astronomy, where they feature stars and meteor showers.

These things might spark interest for viewers to pursue astronomy.

Changed this criteria to fit the song’s sad nature. As can be seen throughout the video, it was dark most of the time. This carries well their title which signifies the low point of love, or relationship.

I suppose that it would not be picked by media, due partly to their lack of popularity, and partly due to the nature of the song.

KPopReviewed applauded the group for its “powerful” chorus, camera angles, and dance breaks. It was a good move when they sing the chorus. Not-so-good points include their forgettable verses and their rap which lacked greater impact. As a whole, it was their strong release for this year.

Further reading on the comments reveal that some are not impressed, for the main reason is on MV sharing some looks and concepts with other groups under JYP Ent.

TheBiasList told that GOT7 has been on the complaints list for several years. Though averse to bass, this leans closely to rock and it did not put off the song’s momentum. Added to that was the “meandering melody” that fares to almost none, common in other popular songs.

Positive notes focus on “trendy instrumentation”, and the refrain that keeps the whole song upbeat with group’s vocals.

As a whole, I find it exciting, though this is a sad song by nature.

While I was not impressed on how the production played with the camera in some parts (as I felt dizzy looking on it), they nevertheless carried their performance well.

On some points, full points were given to colors as they chose colors that best describes sadness. Meanwhile, one point lacking on music was that it was quite deafening.

This refers to 3:33, where they drew inspiration from their song Hard Carry. 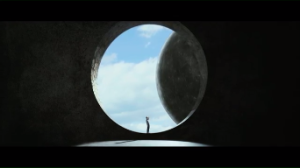 Gravity is featured in the video, at 2:11 – 2:23, where furnitures are sliding down. This may be considered when constructing unusual houses.